"11-21 Canal Reach is the largest of Bennetts Associates’ four projects for Argent at King’s Cross and occupies one of the last development plots towards the north of the site, close to the High Speed 1 railway line into St Pancras.

The building takes the form of an enormous terrace, sandwiched between the varying curves of the railway on one side and the street on the other. With a total length of around 200m, it functions like two separate buildings derived from four rectilinear structures, expressed externally through faceted banks of brise soleil that overlap as they follow the curve. Above the eighth-storey plateau, smaller office pavilions and a 4,000m2 garden occupy the skyline, thanks to all major plant being concealed at ground level alongside the railway embankment.

Internally, as the width of the terrace narrows towards the north, the central voids take up the slack and allow the occupier to introduce colour and complexity as an inventive counterpoint to the uniformity required elsewhere.

Conceived more than seven years ago, the project has achieved BREEAM Outstanding but there was a particular focus on operational energy and embodied carbon, the latter being greatly assisted by Simon Sturgis. The project undertook embodied carbon assessments from Stage 2 to completion, with a final as-built upfront total of 705kgCO2e/m2. It was also the first project to publicly publish a LETI declaration. It was one of those rare projects where delivery matched the expectation, with the design team revelling in its co-location on site with a collaborative contractor, BAM, and its suppliers."

Full article on the AJ. 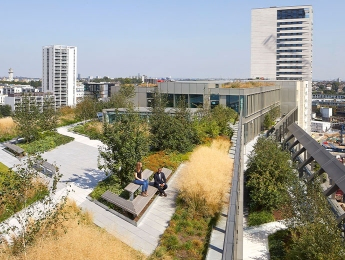 2015 — 2021
An environmentally ground-breaking office block that creates a new urban crescent and offers an expansive and highly landscaped accessible roofscape.