Construction completes on our first all-timber building in King's Cross

Construction of the brand-new King’s Cross Sports Hall, a community sports centre and gym, located at the north east edge of the 67-acre King’s Cross development, has now completed.

The building, designed by Bennetts Associates alongside engineering company Arup, features an indoor sports hall and a health and fitness suite over two levels. The sports hall has been built to Sport England standards and can be used as four badminton courts, a basketball court, a volleyball court or a five-a-side football pitch. The building will be operated by Camden Council with the gym being managed by Better Gyms.

The building’s position, just three metres above the underground tunnels of the Thameslink railway line, created a unique design challenge meaning the building needed to be designed using lightweight materials and with shallow foundations. The Sports Hall, built by BAM, is primarily constructed using a cross laminated timber (CLT) frame and glulam timber columns, a natural alternative to steel and concrete that is both lightweight and carbon friendly. It is clad in zinc and has a super-lightweight concrete substructure that runs perpendicular to the tunnels to prevent concentrated loads. The serrated roof and façades of the building are a nod to its railway context and heritage.

Designed to meet a near-zero carbon target, several innovative features were incorporated into the design, including various methods of ventilation and the use of glazing to provide daylight while reducing heat gains. The building also benefits from its connection to the King's Cross Central District Heating and Cooling Network, an efficient system for heating all the buildings at King’s Cross that means that conventional boilers are not required.

The building’s sustainability credentials are further bolstered by the fact it was designed to have multiple lives. When it opens, the gym and fitness suite on the upper floor will be open to the public, however for a time the sports hall will be the home of the Construction Skills Centre. This is a temporary fixture until the skills centre moves to their new home in Euston, at which point the sports hall will open to the public.

Will Colthorpe, Partner, King’s Cross Central Limited Partnership comments: “We are thrilled that the Sports Hall has now completed, adding a further piece to the King’s Cross jigsaw. Our development activity is now largely focused at the northern end of the site and we’re extremely pleased with how it is all coming together and offering residents, workers and visitors a wide range of amenities. The Sports Hall will be a fantastic asset for the local community, and we look forward to opening the gym later this year.”

Julian Lipscombe, Director, Bennetts Associates: “As our first completed all-timber and ‘near-zero carbon’ building, this project is hugely significant for us, with expertise already being applied to other commissions.Particular delights are rationalising extreme substructure challenges into a deceptively simple superstructure that echoes the site’s railway heritage and the warmth of the timber interior acting as a beacon for the community.Extending the collaboration established with Argent and LB Camden on 5 Pancras Square has been very rewarding.”

Francesco Ferrari, Senior Engineer, Arup said: “We are proud to have been involved in this unique project which further contributes to our ongoing work in the regeneration of King’s Cross. Working in collaboration with the wider team, we were excited by the challenge of ‘as light as possible’ and responded to this by innovating and pushing the limits of concrete and timber design, embracing the critical interactions between what lays above and below ground. We feel a strong sense of achievement that Arup played a central role in ensuring the engineering constraints related to the sensitive underground tunnels directly beneath the Sports Hall were embraced by the whole design team. “

“We conducted extensive tests on the bespoke concrete mix to ensure it wasn’t too heavy. This regime affected batching plant operations, and meant independent testing on site, and re-weighing before a pour commenced.

“The timber also had its technical aspects, CLT’s moisture retaining properties making it hard to dry. We came up with a vented design solution where we could install the roofing membrane and allow air/moisture to escape so the timber dried out. This worked very successfully. We managed to bring the scheme in despite the start of the UK lockdown and I’m delighted to say the finished building looks impressive.” 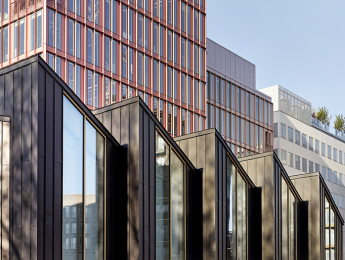