The summit began with Birmingham City Council’s leader, John Clancy, appealing to the audience for their help. Birmingham is struggling with a wide range of issues; high unemployment, terrible air pollution, fragmented infrastructure and the scars left by many years of unsustainable post-war development. 150 delegates were tasked with creating workable solutions to the city’s problems by working together in small groups focused on specific challenges.

I joined the ‘Green Infrastructure and Natural Capital’ group and was tasked with addressing the additional challenges caused by the city’s lack of green infrastructure. The statistics seem to suggest that, if nothing is done to combat the lack of green space and the fragmented nature of the city, this will only harm Birmingham’s air quality which already has a poor reputation compared with other cities of comparable density. Out of the wide-ranging solutions presented by the group, two strategies have stayed with me over the last month. They both focus around consolidating existing systems to increase efficiency. 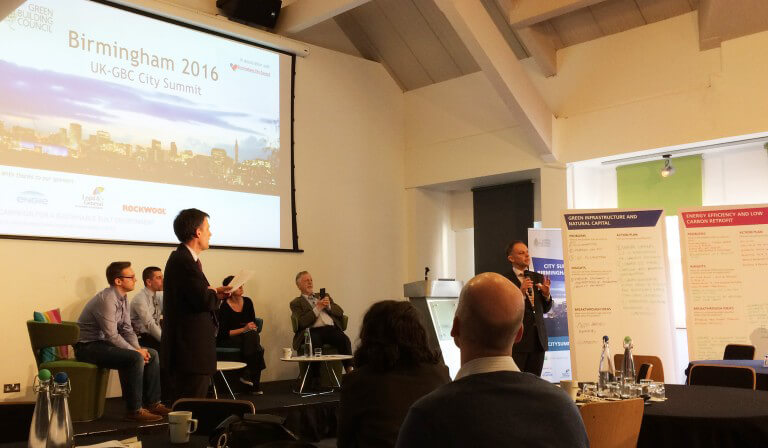 Firstly, it’s obvious that Birmingham needs to take steps to link parks, green spaces and public open space. This could easily be undertaken at the same time as the tram system extension to create a network of green boulevards running alongside the trams through the city. Now consider Birmingham’s successful and award-winning district energy scheme. If this could be expanded at the time of the tram extension to link to a network of city-wide schemes, a number of networks could be consolidated. The group had a vision; consolidated services including water, heat and power running deep beneath a network of irrigated green corridors which could be installed alongside the new tram system’s arterial routes. This consolidated network could push Birmingham further towards a sustainable future.

The second solution also involved consolidating existing systems; this time to address the problem of air pollution. Late last year, I attended an Islington Sustainable Energy Partnership conference which also focused on the problem of air pollution. One of the solutions pitched by Islington and Camden councils’ sustainability teams was consolidating their logistics. To cut down the number of vehicles travelling within the city, all deliveries (from an office’s weekly supply of coffee beans to their monthly stationery delivery) would arrive at a logistics hub far from the city centre. At this hub, electric vans would be loaded with deliveries that would be grouped based on their destination. Boxes of electronics and crates of groceries would all be packed tightly together to cut down wastage. Then the van would drive to its destination; providing one single delivery with everything the customer needs. Any recycled waste, deliveries or returned items could then be loaded up into the space left in the van before being shipped out of the city. Suddenly, each office’s delivery requirements would be taken care of in one single sustainable event. The operator would look similar to the old publicly-owned Royal Mail but would operate based on efficiency, not on minimising delivery times. Small schemes are already in existence in London. Camden’s LaMilo project is a good example and freightinthecity.com includes a wealth of good information.

Meanwhile, Joanne was concentrating on similar topics in the ‘Sustainable Design, Construction & Supply Chain Innovation’ group. Interestingly, her group focused on ways the city could incentivise investors and developers to initiate projects with a clear focus on sustainability. Their aim was to answer the question of how a city can become more sustainable as a whole. This was an incredibly complicated issue involving the inner workings of the city council. The political landscape is shifting in Birmingham as a result of the devolution deal and the plans for a new ‘metro mayor’. Therefore, it’s essential that sustainable policies are at the heart of the debate.

The workshop sessions were punctuated by a visit to one of Birmingham’s three major centres for future development. I was given a tour of the future HS2/Curzon Station site, the city centre and the adjacent Digbeth district. Walking round with fellow members of the Green Infrastructure group, we identified a great number of opportunities for consolidating services and reintroducing green spaces. The tram network will soon be extended along the B4100, a wide mass of tarmac and concrete crying out for intervention. Whilst I was walking around Digbeth, Joanne was being introduced to the Icknield Port Canal Loop which will soon be home to a large new family-focused residential neighbourhood. After we returned to the summit, all teams were encouraged to develop their ideas by applying each solution to the sites they’d experienced. 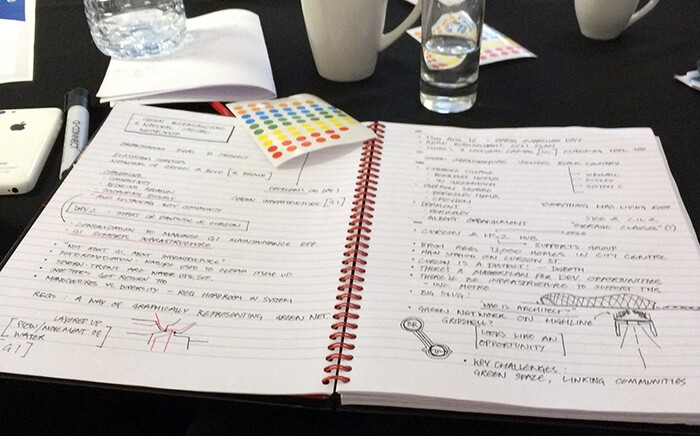 The many solutions presented at the end of the event were met with much enthusiasm; both by the city councillors, the head of the planning department and by the UKGBC. When discussing the event over coffee at the end of the second day, all involved agreed the event was incredibly intellectually stimulating and highly enjoyable.

Over the last month, I’ve continued to research the topics above in an attempt to capitalise on the lessons we learnt. Fortunately, the strategies, systems and topics we covered at the summit have proved to be applicable to several projects currently in the office. We’re undertaking two projects in Edinburgh that have the opportunity to use the University of Edinburgh’s CHP system. Furthermore, I’ve also recently attended two workshops aimed at designing out waste with my colleagues, Ben Hopkins and Gavin Pike. We’ve discussed consolidating logistics to reduce packaging and emissions with BAM and Sir Robert McAlpine. We’re hoping to implement some of the strategies from the UKGBC summit in the short-to-medium-term and to see Birmingham City Council work towards implementing these strategies in the long term. If all goes to plan, we’ll all see the lasting positive effects of the UKGBC’s Annual City Summit for years to come.