A dramatic new flytower has appeared on the skyline of London’s West End. The project entailed building a 35-tonne capacity flytower plus offices and plant on top of an existing theatre that had to remain operational at all times. The tight deadline was the opening of the blockbuster show, Motown, in March 2016.

Shaftesbury Theatre is a prominent listed building with an ornate terracotta façade. The serrated shape of the flytower box forms a dramatic angular volume on the skyline and is fabricated from panels of weathering steel, complementing both the terracotta and the adjoining building’s faience and brickwork.

The grade II listed theatre dates from 1911 and was the last and most northerly of Shaftesbury Avenue’s venues to be completed. Under its current ownership it has built a reputation as a receiving house for large-scale musical theatre, but with the technical demands of productions increasing, the existing timber-framed flytower was increasingly seen as a limitation on the commercial potential of the venue.

A structural solution was devised which would enable a new flytower with a 35-tonne scenery capacity, and much-needed office space to be built. Straddling the existing stage on four steel columns, it had the potential to be independently built above the existing flytower roof, allowing the theatre to operate below during much of the construction period. However, the listed status of the building meant that an innovative architectural solution was demanded which would accommodate the significant new volume whilst complementing the theatre and its setting.

Internally, the front-of house within the theatre is currently transformed as part of the second phase of the project. The creation of a welcoming and brand new 200 sqm foyer space below ground is connected to the basement-level stalls. In addition, the current ground and upper-level bars are being extended and refurbished, with an external pedestrianisation generating spill-out space hosting a new kiosk. The project will not only increase foyer space and toilet provisions but more importantly will create new bar spaces with more generous serving positions.

The form of the building was developed in order to create a distinctive contemporary intervention on the theatre’s skyline. With the volume and height fixed by technical constraints, a serrated form was developed which would accommodate windows, smoke vents and other technical requirements within a unified geometry of angular planes. 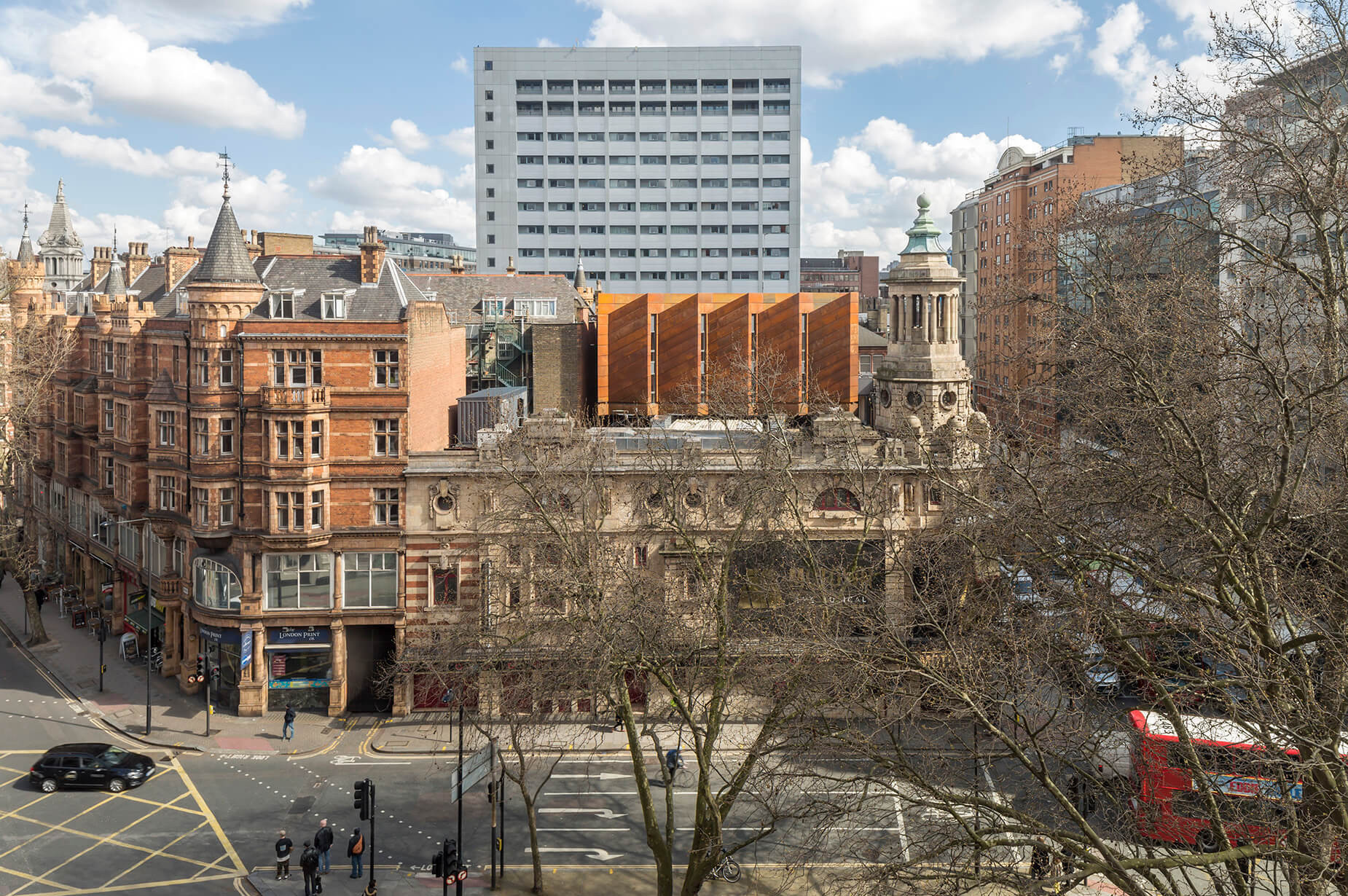 “Whilst maintaining the grace and beauty of the Shaftesbury we now have a contemporary addition that enhances the facilities of the Theatre, giving us the capacity to accommodate the increasing demands of productions.” 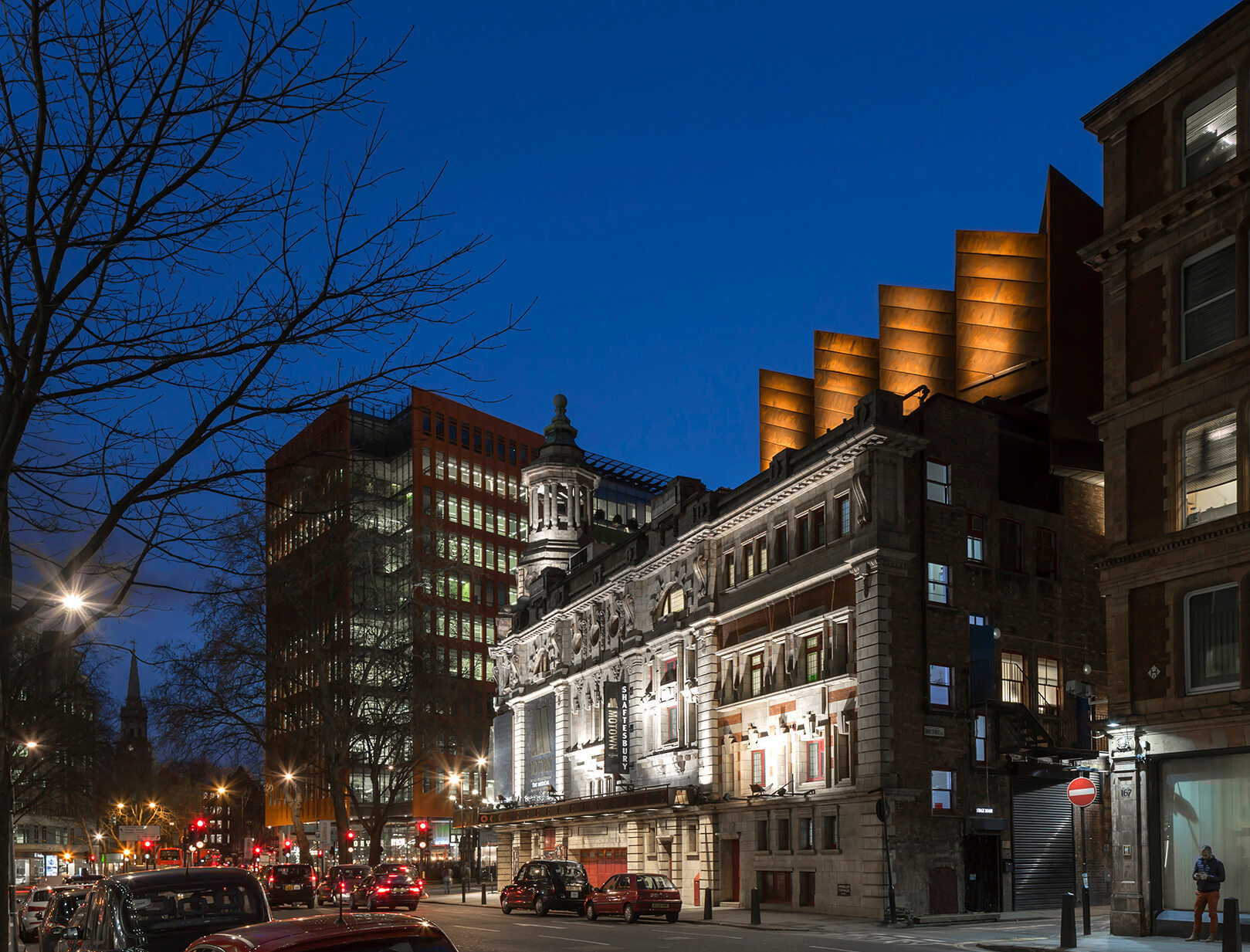 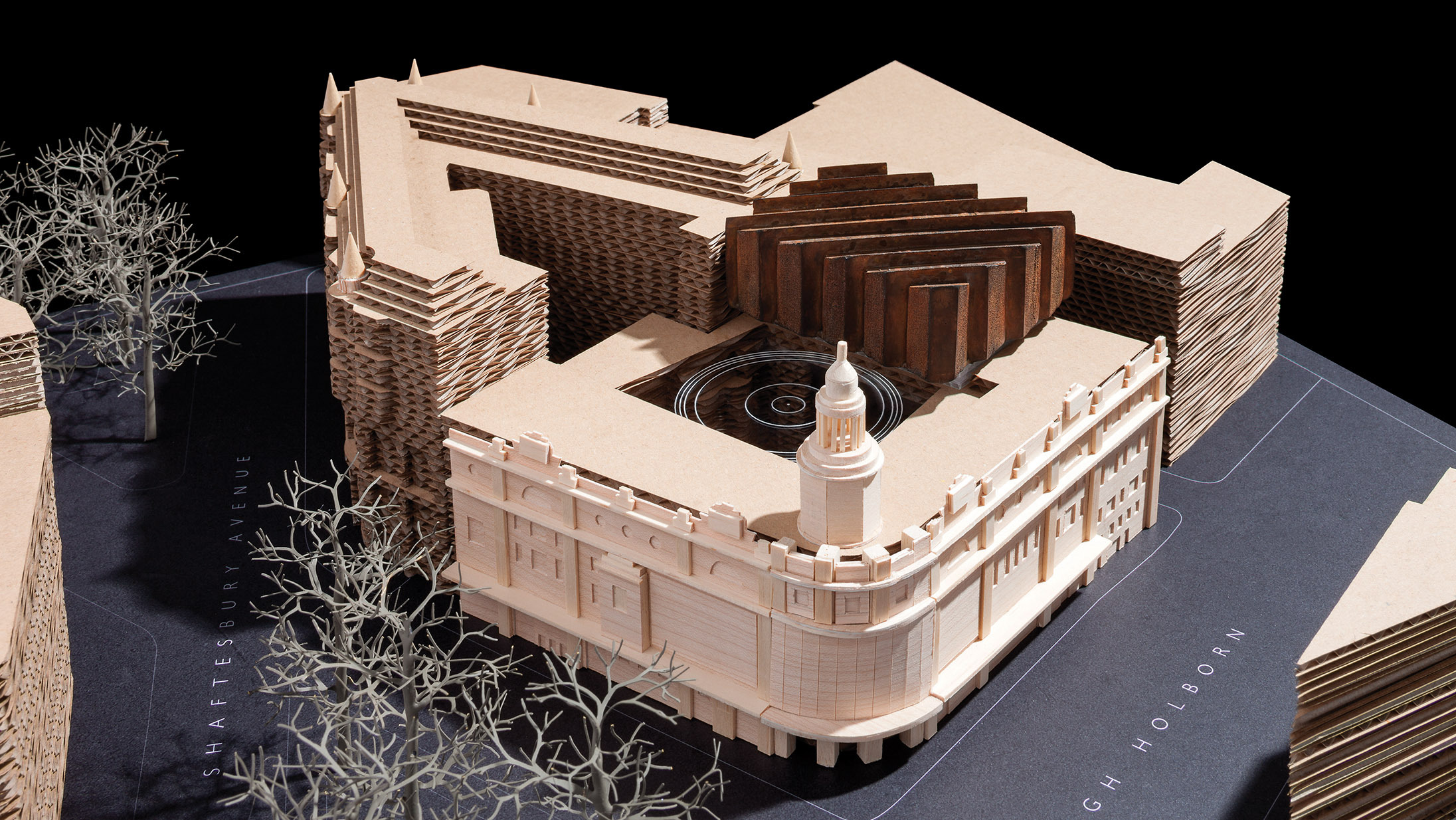 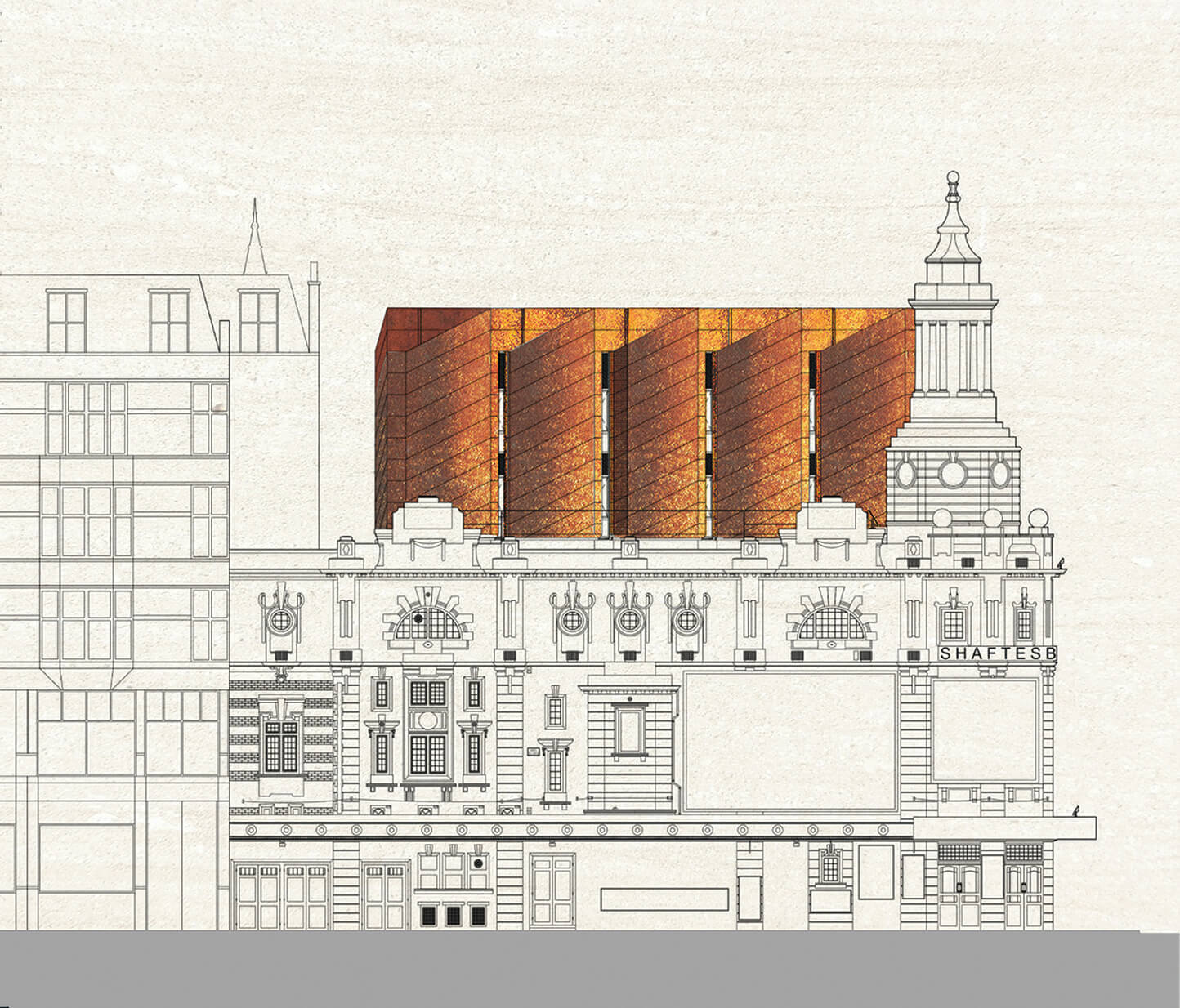 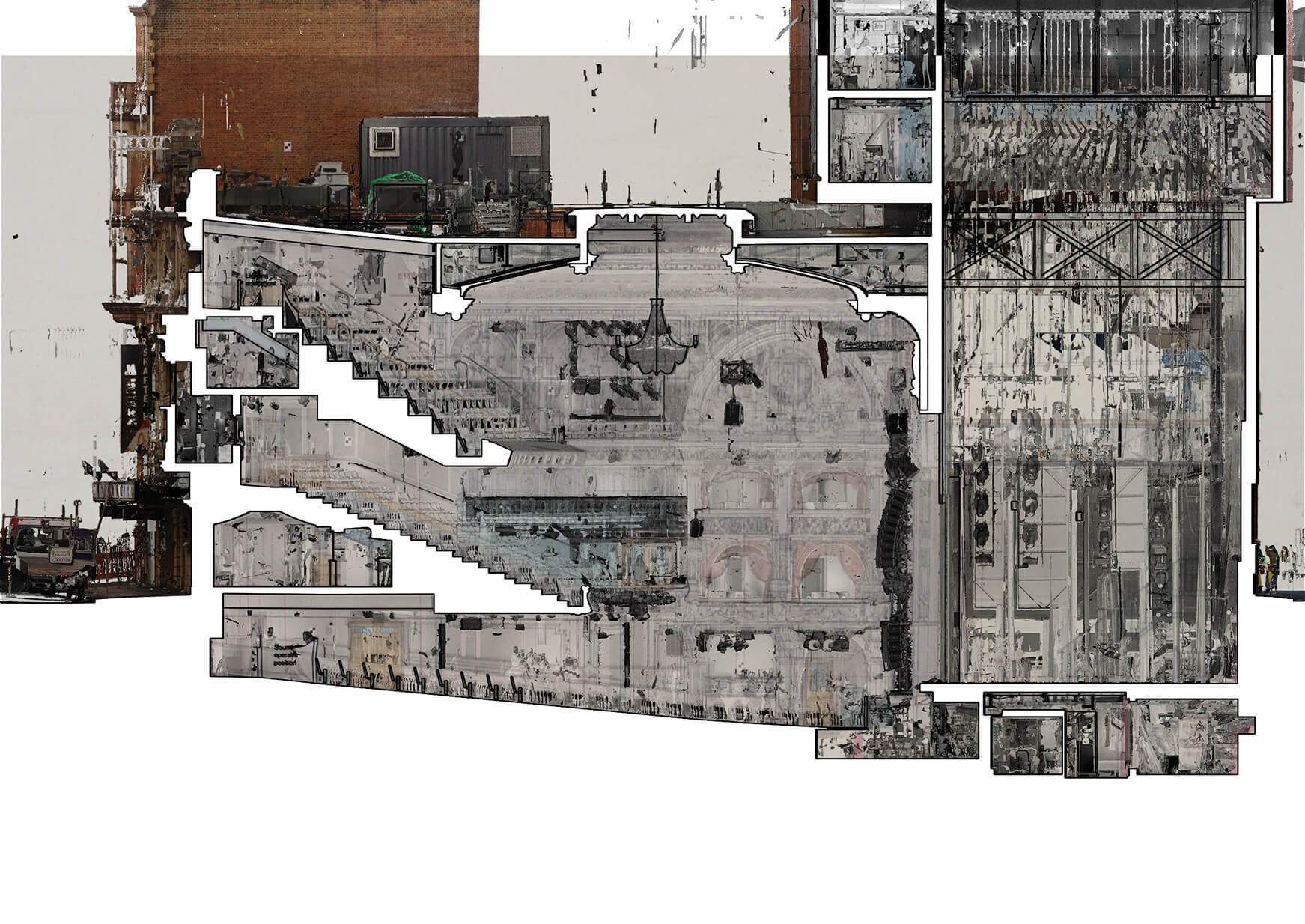 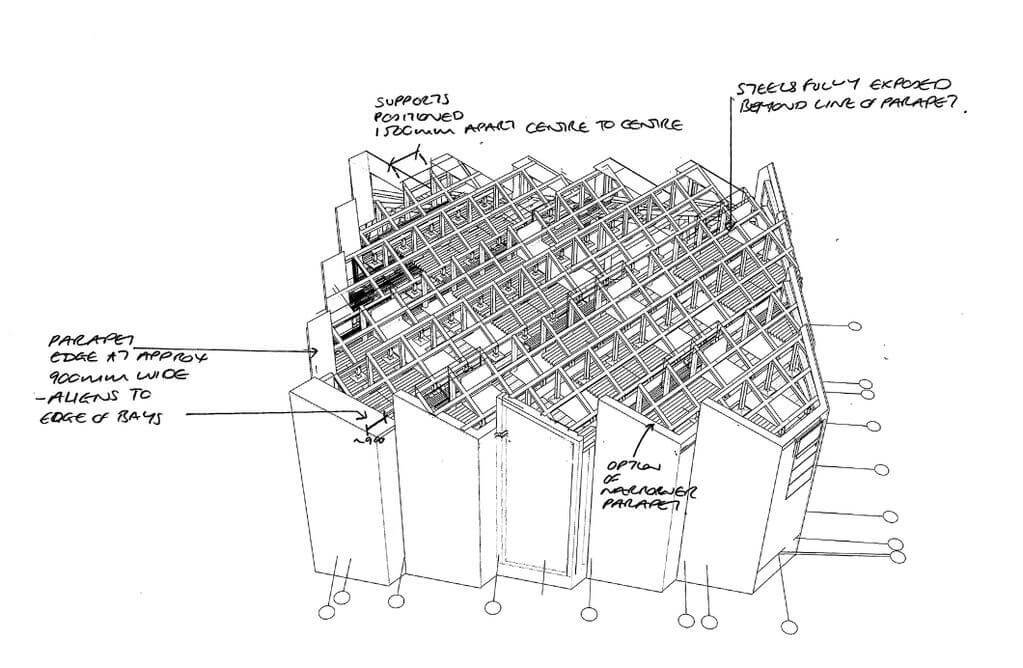 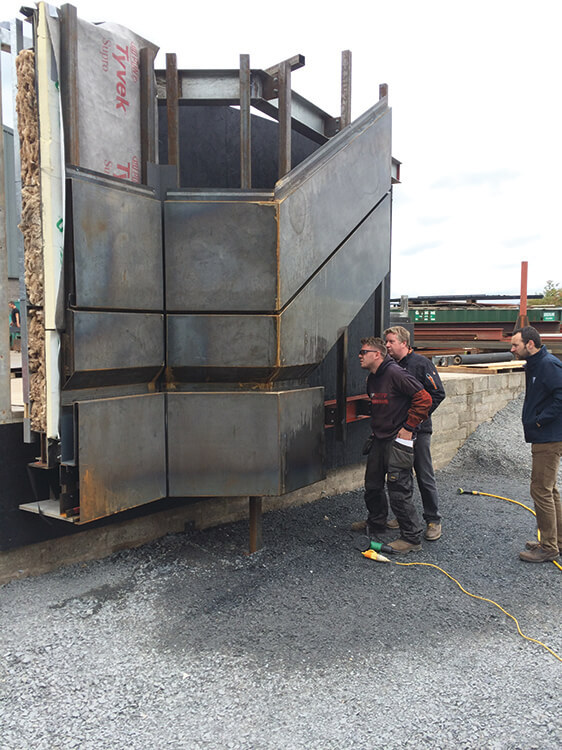 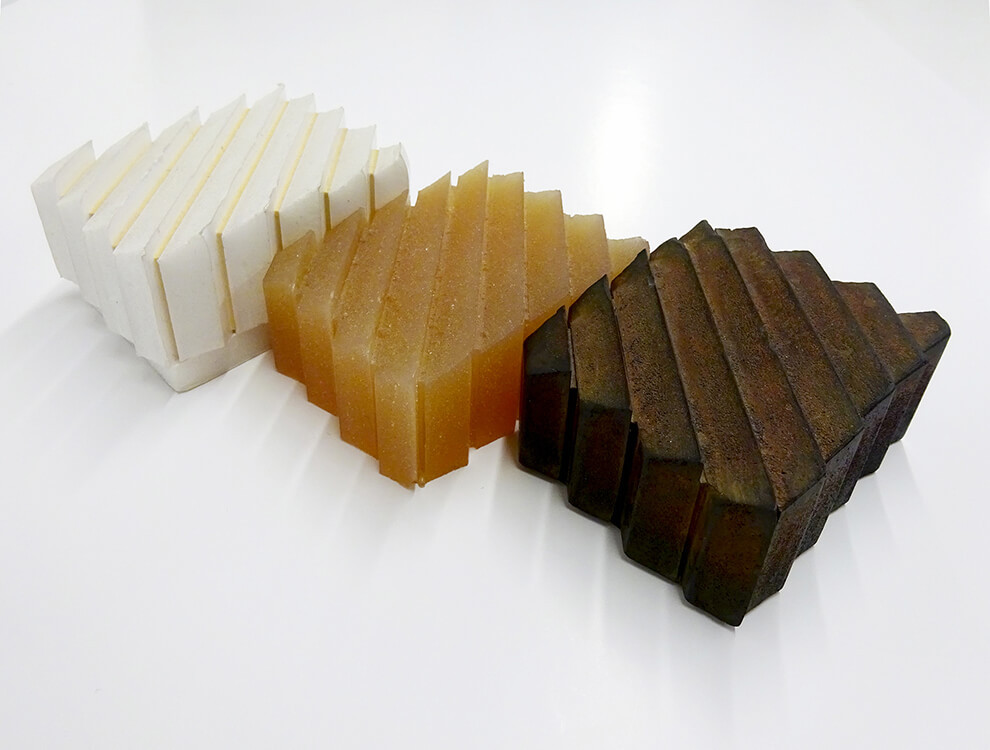 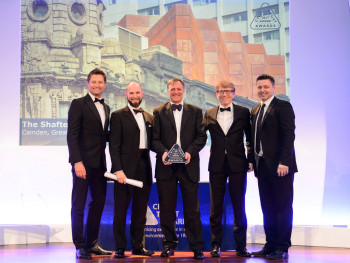 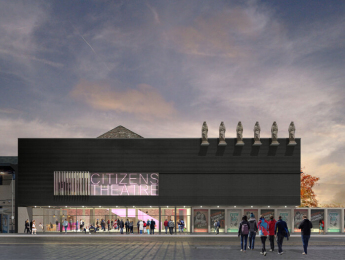